Do you have a question or need more information?
Fill in the form below and one of our team members will get back to you shortly

Dr Rastogi's expertise is in body sculpting and liposuction in Sydney, creating beautiful and balanced bodies

The aim of any Liposculpture is to create shapeliness and slenderness. The sculpture should produce flowing lines that emphasise the beauty of the silhouette.

How does the Liposculpture surgeon achieve a beautiful result?

In my opinion, Liposculpture/liposuction surgery is the most artistic cosmetic surgical procedure. The surgeon is the sculptor, the patient’s body is his marble and the newly Liposculptured figure his finished work.

To create a beautiful body sculpting work the doctor must be both artist and surgeon, with the right blend of surgical skill, clinical judgement and artistic ability, combined with the passion to achieve great results.

However, Liposculpture surgery is much more difficult than sculpting in marble because the surgeon is working on a living person.

The human body has skin that must contract and not loosen and hang: fat, which changes with posture and bone structure; and stature, which predetermines the proportions of the figure.

When performing a Liposculpture procedure the surgeon must work with all these components to produce his result, all the while keeping the safety and wellbeing of his patient uppermost in his mind.

The Liposculpture surgeon must have an innate appreciation of the human figure and the principles of balance, proportion and harmony.
These combine to create an attractive new figure.

The Liposculpture surgeon’s experience and training allow him to create the new form he has designed.

They also give him the ability to produce smooth curves, even results and maximise fat removal and skin contraction with the use of specialised techniques such as superficial undermining. Employing technologies and using microcannulas can further improve the result.

Dr Rastogi has been performing Liposculpture in Sydney for over 18 years.

“Liposculpture is an incredibly effective and exciting procedure in which beautiful new bodies are sculptured, when the surgeon has the essential combination of artistic ability and surgical skill,” says Dr Rastogi.

Read more about what goes into creating a living sculpture here

This comes from experience and training. It allows the surgeon to evaluate the skin, the fat and the underlying musculoskeletal structures prior to performing the body sculpting to determine the potential for his patient to achieve the desired result.

I believe it is essential for the surgeon to be passionate about his work, his results and also his patients’ wellbeing. It is only natural that a patient contemplating a Liposculpture surgery in Sydney will be apprehensive about the procedure and outcome. Empathy, comfort and patience from the surgeon allows the patient to express themselves, so their desires can be understood and satisfied. It is said that beauty is in the eye of the beholder, and in this instance, the beholder is the patient. It is the patient above all who should appreciate and enjoy the result of the procedure.

LIPOSCULPTURE BEFORE AND AFTER 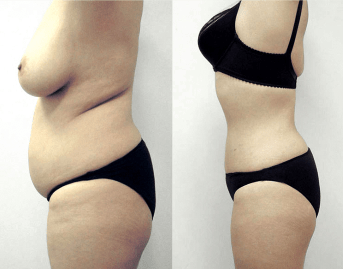 what is the difference between Liposculpture and liposuction?

There is a big difference between Liposculpture and Liposuction. Liposculpture is not concentrated on the bulk reduction of fat as liposuction procedure is, but rather uses fat removal to sculpt the figure and create more harmonious curves.

Using specialised microcannulas and advanced techniques, Liposculpture is a fine, precise and predictable sculpting procedure. Superficial undermining is the technique of removing fat from directly underneath the skin. This procedure achieves greater skin retraction and allows for very precise sculpting.

The Liposculpture procedure in Australia is very safe and Australia has an impressive record by world standards. However, the quality of results reflect very much the skill and vision of the surgeon, so patients are advised to chose their surgeon carefully, looking for not only training and experience but artistic vision as well.

How does liposculpture work?

Liposculpture is performed to improve the contours of the body by removing excess fat to create a slimmer, more attractive shape. While not a weight loss procedure, liposculpture can still be performed on bigger patients, so long as their lifestyle changes afterwards.

So how does liposculpture actually work?

The instrument used to perform liposculpture is known as a cannula. This is a long, thin tube with a rounded end that has a series of holes along the shaft. A common misconception surrounding liposculpture is that the surgeon sticks a tube in to suck the fat out. This is not strictly true. Think of the cannula like a file. During liposculpture, the cannula is moved backwards and forwards, acting like a file that files the fat down to create the desired shape. Those little filings of fat then come out through suction.

There is very little blood involved in a liposculpture procedure, both because the fat itself is very soft and removes easily and because the blood vessels in the area have been shrunken down by the medications placed into the incisions. This means that once the fat is removed, the skin will contract. After the procedure, patients will typically need to wear a garment to hold the skin against the muscles, allowing the skin to re-fix to its new shape.

Will my fat return after having liposculpture?

To answer this question, we first need to understand how physiology affects how fat works. Fat cells are like brain cells - the body can create new ones; however, it is difficult for the body to do so. Essentially, when fat cells are physically removed from the body, the body has trouble putting new ones back in. When a person gains or loses weight, they don’t gain more or less fat cells. Rather, their fat cells get larger or smaller, but the number of fat cells in the body remains the same. During a liposculpture procedure, the fat cells are physically removed. Once they are removed, they are less likely to return.

Now, if a person only removes few fat cells in a specific area and the majority remain in the body, a little bit of expansion in those remaining fat cells will return the problem. However, if a person undergoes a more significant liposculpture procedure and the majority of the fat cells in an area are removed, the ability to regain fat in that area is significantly reduced. For this reason, Dr Rastogi will usually remove 70 to 80 percent of the fat that’s in an area when performing a liposculpture.

Why do we leave fat behind?

The reason that we don’t remove all of the fat cells in an area is because the shape and attractiveness of the figure is a result of the sculpture of the remaining fat. The gorgeous curves that Dr Rastogi creates isn’t just skin on muscle and we need just enough fat to produce those beautiful contours. Despite that, the vast bulk of fat will be removed during the procedure, which will remove the vast bulk of your ability to gain weight.

A common question that Dr Rastogi receives: If the fat is gone from my tummy, is it going to come back somewhere else? The short answer to that is no. The longer answer? Maybe.

Why is this? It isn’t that your fat will go somewhere else because it couldn’t go to the area that was removed during your liposculpture. Instead, it’s because we’ve removed the areas that caused your problem, meaning that you don’t perceive weight gain until you’ve relaxed your lifestyle and gained weight in areas that you normally wouldn’t have. In short, if you maintain a healthy lifestyle after your procedure, you won’t gain fat in new areas.

How much does liposculpture cost?

The cost of liposculpture depends on the area being treated. Essentially, the formula with which the cost is determined is based on time. To use an operating theatre, there is a cost per time unit, which ultimately runs at around 7,000 dollars an hour.

But what does that mean?

Performing liposculpture on the hips, knees or thighs, for example, would likely take around 45 minutes. Say that you chose to operate on two of these areas, the procedure would take around an hour and a half and cost around 10,000 dollars.

Of course, the more areas you treat, the more the procedure will go up in cost. Some areas are bigger and take a little longer, however even some smaller areas can take extra time due to being more intricate to operate on.

Let’s say, for an example, that you were receiving liposculpture on your outer thighs, inner thighs and knees. This procedure would likely cost around 12,000 dollars. If you were to add your lower abdomen to the procedure, the cost would increase to around 15,000 dollars.

Do you have a question or need more information?
Fill in the form and one of our team members will get back to you shortly